Are The Crazy Popular Hunter Rain Boots Actually Worth The...

During July’s Nordstrom Anniversary Sale, I spent a lot of time (and, yes, money) sifting through the deals. One of my purchases was a pair of short, glossy silver Hunter rain boots, which I’d coveted since I saw someone wearing a similar pair on my college campus several years ago.

I got them for $94.90, about a 35 percent discount off their usual price of $145, thanks to the sale. I felt good about this—until, about a week later, while sifting through apparel and footwear on Amazon, I found a similar-looking pair of rain boots there, from a decidedly not-Hunter brand called Asgard (as in, the planet Thor is from). They were $26.99 and highly-rated, with an overall 4.5 stars out of their 1,129 reviews. Their grade on Fakespot, an ecommerce-analyzing service that determines whether or not reviews can be trusted, was a D, which means that probably isn’t a totally accurate rating. Still, I was struck by how this was a better average than my new Hunter boots, which have about 4.2 stars out of 200 reviews on Nordstrom (and there’s no way to to Fakespot those).

Had I been swayed by the alluring power of brand recognition and missed out on a possibly greater, definitely much cheaper pair of boots? I didn’t know, but I aimed to find out. I bought the Amazon pair for myself, brought them and the Hunter boots to the office, and tested them both in a body of water.

How did we test them? 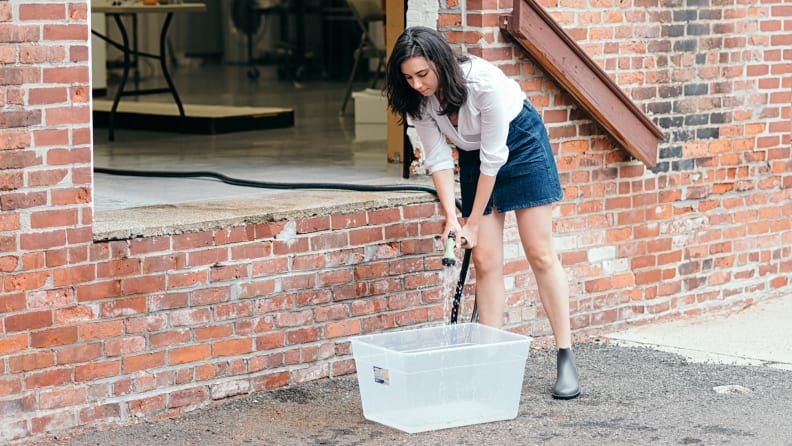 I should note that the “body of water” I utilized was a self-built puddle of about three inches of water that I constructed with a plastic storage bin and a hose (making it one of the lowest-rent experiments that have ever come to pass in Reviewed’s lab). Nevertheless, it worked for my purposes. In the past, my main rain boots’ “testing” has come from splashing through storm run-off while crossing the street with the naive assumption that the rubber exterior would protect my feet from the moisture—only to realize, when sogginess crept through the seams, this wasn’t always the case.

Hunter boots are supposed to be immune to this, due to their vulcanized rubber and well-sealed construction. The Asgard boots are also good at keeping water out, according to the reviews on Amazon: “You can literally submerge your foot in water while wearing them and nothing leaks in,” one person wrote. The Hunter boots, on the other hand, showed mud—from the dirt on the shoes that mixed into the water when I stepped in—more than the Asgards after I got out, but I think this is due to their light color, a slate gray as opposed to the Asgards’ darker charcoal hue, then anything else. Also, it was easy to wipe off. Feeling brave, I upped the ante by stomping in the water when I was wearing each pair. When I did this, both got wet inside—ankle boots, by definition, don’t come that far up the legs and will let water in from above, whether from overzealous splashing, a misjudgement of the depth of a sewer-drain puddle, or a torrential, sideways rainstorm.

Which boot looks and feels better? Now, let’s talk style and comfort—both matters that comes down to personal preference, but can still be evaluated.

To me, the Hunter boots look much more expensive than the Asgards. They are glossy, while the Asgards appear dull and matte. Upon more detailed inspection, I noticed a few other elements that made the Asgards seem lackluster, such as single-stitching (rather than stronger-looking double stitching) all around the sole and ankle elastic, and a fine raised line along the midline of the boot upper where the two sides of the boot were no doubt fused in production.

The connection of upper to sole on the Asgard doesn’t appear as seamless as the Hunters, as they are held together with glue rather than being folded and firmly stitched into place like the hunters. Basically, the Asgards look like they cost less than a quarter of the price of the Hunters. This is true, so it’s not a damning observation—and, for $26.99, it’s a good-looking boot.

Both boots felt comfortable, with squishy-yet-sturdy soles I could see myself walking around in for hours. However, I struggled with the Hunter boots when I was putting them on. They have extra stitching that reinforces the elastic around the ankle, likely to prevent it from stretching out, but it made the opening tight to shove my feet into. And, when I was tugging at them, the force of my effort caused the removable insole to bunch up inside the boot a few times. (The more I take the boots on and off, however, the less this happened, so it might just be part of the breaking in process.) The Asgard boots slid on easily from the start, and I didn’t have any issues with the insoles moving around.

Which boot should you get? 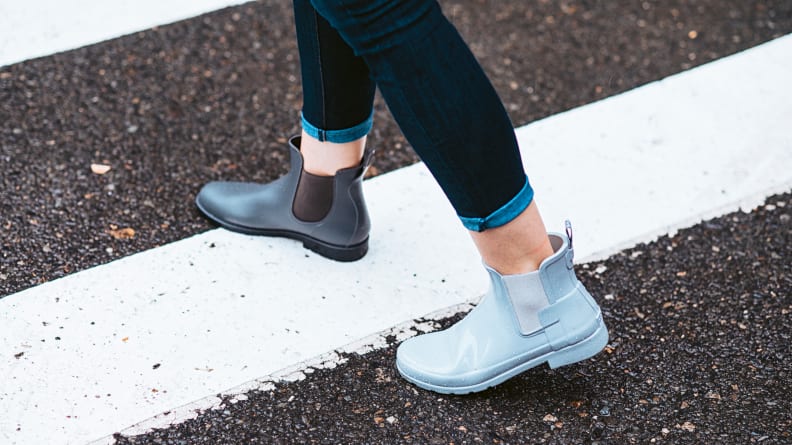 Maybe it seems like a copout, but I would like to split the metaphorical “Best In Show” ribbon in half and give it to both boots. They are effective at keeping feet dry, comfortable, and attractive.

But there are quality distinctions between the two. Sure, both kept out water in my tests. But I’m worried about the Asgards’ construction in the long run, particularly on account of their single stitching—in my experience, this does not hold up over time and is often only good for a season or two of wear. This didn’t seem to be a common issue in the reviews, but a few people mentioned that their boots fell apart after only a few months.

On the flipside, Hunter boots are built to last. I haven’t had my pair long enough to verify this, but Betsey Goldwasser, one of Reviewed’s photographers, has. She got a pair of the brand’s bright teal wellies from Free People in seventh grade, and, coming up on 12 years later, she says they’re still going strong.

The downside of this? She still has the color she picked out when she was 12. “I thought I was only going to have them for a few years,” Betsey says. “So I got them in teal, which I don’t know if I would have picked out today.”

That said, the Asgard boots are a great deal if you don’t want to drop a hundred bucks or more on a pair of rain boots—by comparison, you could buy three pairs of Asgards before you get close to what I paid for the Hunter boots (or five if you pay full price). Put another way, this means you could buy Asgards every year for half a decade before you spend as much as you would have on the pair of Hunters.

Of course, if your Hunters last as long as Betsey’s, they are a better value in the long run. But if you aren’t sure how much you’ll use them, or simply don’t want to commit to a certain rain boot look for a decade, it might be a safer bet to try the pair that’s more disposable. 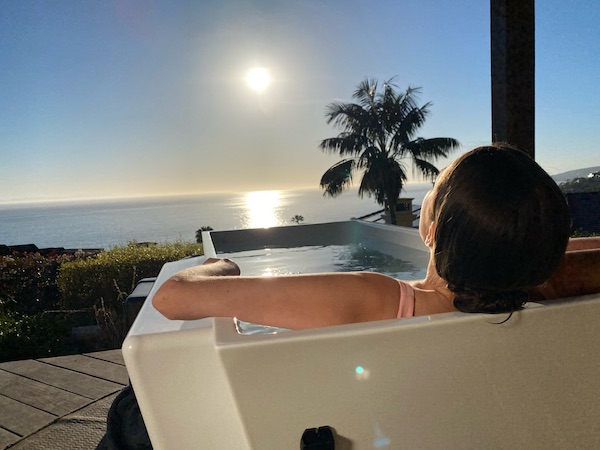